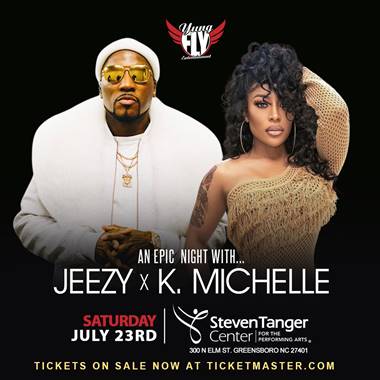 One of the pioneers of trap music, Jeezy, and American singer and actress K. Michelle are coming to the Tanger Center stage on Saturday, July 23, 2022.

Tickets are on sale Friday, March 11 at 10 a.m. at TangerCenter.com and Ticketmaster.com.

Jeezy, formerly known as Young Jeezy, signed to Def Jam Recordings in 2004 and deputed his first album,  Let’s Get It: Thug Motivation 101 at #2 on the Billboard 200. Jeezy is credited, along with other Atlanta-based rappers, for helping to pioneer and popularize trap music with a mainstream audience.

K. Michelle is an American singer, actress, and television personality, and rose to fame as the breakout start of VH1s Love & Hip Hop: Atlanta. Her first studio album, Rebellious Soul, debuted at number two on the US Billboard 200.

An Evening with Vince Gill at Steven Tanger Center

Eddie B. Teachers Only Comedy Tour

WAR on the Catwalk coming to Tanger Center on August 9

Brett Eldredge ‘Songs About You Tour’