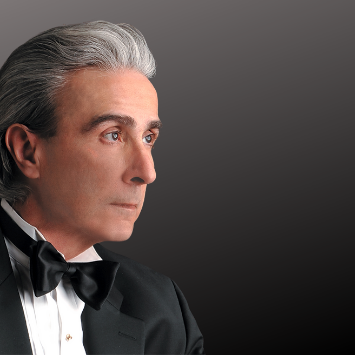 For six decades, Eastern Music Festival (EMF), a nationally recognized classical music festival and summer educational program, is produced each summer on the campus of Guilford College and other venues in the Greensboro, North Carolina, area. EMF is distinguished by its accomplished faculty, exhilarating repertoire, and world-renowned visiting artists under the artistic direction of Gerard Schwarz. This evening will feature guest artist Santiago Rodriguez on piano and the Eastern Festival Orchestra led by critically acclaimed music director, Gerard Schwarz in a program titled “Unity.”

The performance on July 9 will feature the Eastern Festival Orchestra playing Umoja: Anthem of Unity composed by living female composer, Valerie Coleman, the Grieg Piano Concerto in A minor featuring Santiago Rodriguez on piano, as well as the Tchaikovsky Symphony No.4 in F minor.

Santiago Rodriguez has been called “a phenomenal pianist” (New York Times) and “among the finest pianists in the world” (Baltimore Sun). He has performed internationally with leading orchestras as a soloist, recitalist, and chamber musician.

Valerie Coleman is a living composer whose work as a performer, educator, composer, and advocate has a transformative impact everywhere her journey takes her. Coleman was named to The Washington Post’s “Top 35 Women Composers” and in 2020 was honored as Classical Woman of the Year by American Public Media’s classical music review Performance Today.

An Evening with Vince Gill at Steven Tanger Center

Eddie B. Teachers Only Comedy Tour

WAR on the Catwalk coming to Tanger Center on August 9

Brett Eldredge ‘Songs About You Tour’