Learn about the Greensboro Symphony!

How much do you know about the historic Greensboro Symphony? 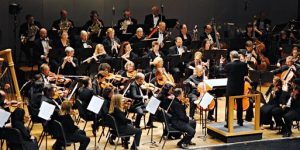 The roots of the Greensboro Symphony Orchestra extend back to the 1920’s when a group of musicians at Woman’s College (now UNCG) banded together with one common goal: to great an Orchestra.

The Orchestra was formally organized as a group in 1939, financially sustained by the College. In 1951, the orchestra began to gain considerable community support under Concertmaster George Dickieson, and became a member of the American Symphony Orchestra League.  It later became independent from the University when an advisory committee formed to further its development.

In 1959, the Greensboro Symphony Society was created with the goals of promoting and fostering musical culture and education in the community.

In 2003, the Greensboro Symphony appointed world-renowned violinist Dmitry Sitkovetsky as it seventh and current Music Director.

The Symphony’s educational programs, supported by the N.C. Arts Council and the Greensboro Symphony Guild, serve more than 50,000 students every season. The Music in the Middle and the Elementary Student programs were designed to correlate with the appropriate grade curriculum.

Adult Education Programs are also offered; for example, Music at Midday is a music appreciation series held in January and February at area retirement communities, Concert Preludes is a pre-concert lectures by guest speakers, open to all classical concert-goers, and Postludes is an after-concert conversation with the Music Director and guest artists.

The Greensboro Symphony Youth Orchestra (GSYO) provides an opportunity for young musicians to participate in a fun and educational ensemble setting with their peers. In its 38th season, the GSYO performed three formal concerts and held a concerto competition that awarded a solo performance opportunity to three exceptionally talented GSYO students. 30 students were awarded with tuition, private lesson, and summer study scholarships. The Youth Orchestra has also had the honor of giving a concert at the Kennedy Center for Performing Arts in Washington, D.C. 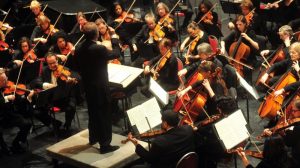 You won’t want to miss the Greensboro Symphony Holiday Concert, featuring an appearance by Santa Claus! Admission to the concert is FREE with a donation of non-perishable food items to benefit the Salvation Army.