Say Goodbye to Summer at the Bog Garden

Summers in North Carolina are known for their heat and humidity. So, I figure the best way to spend one of the last weekends of the season is in a bog. Not just any bog, but the Bog Garden at Benjamin Park. Although, if I'm going to be completely honest here, I would go to any bog, swamp, marsh, or another type of wetland. However, Greensboro isn't a city filled with swamps, so my options were limited, but that's not actually a bad thing. While I find wetlands to be one of the most fascinating ecosystems, my mosquito allergy does limit my ability to fully appreciate them, so one bog is really enough. Also, it's just a great bog, garden, park, and however else you choose to categorize it. And, yes, the ability to call this a "bog post" instead of "blog post" played a larger role than it should have in my decision to spend a summer evening galavanting through a bog.

I suppose I should attempt to give some concept of what the Bog Garden is before rambling about my adventures there. It's one of Greensboro Beautiful's four public parks and my personal favorite. The others just don't have enough bog, but they are all lovely places. Maybe I'll talk about them another time. Anyway, the garden is more of a nature preserve than a typical garden. There's a large section of elevated boardwalk guiding you through this hidden nook of natural beauty. There are many, many plants, and they are labeled. Birds too! In fact, I think the garden may be a happening place for birdwatchers. I know very little about watching birds, at least in a formal way. There is this one cardinal that I have regular staring contests with through my living room window, but that's the extent of my bird watching. The main point is the birds will probably let you look at them. 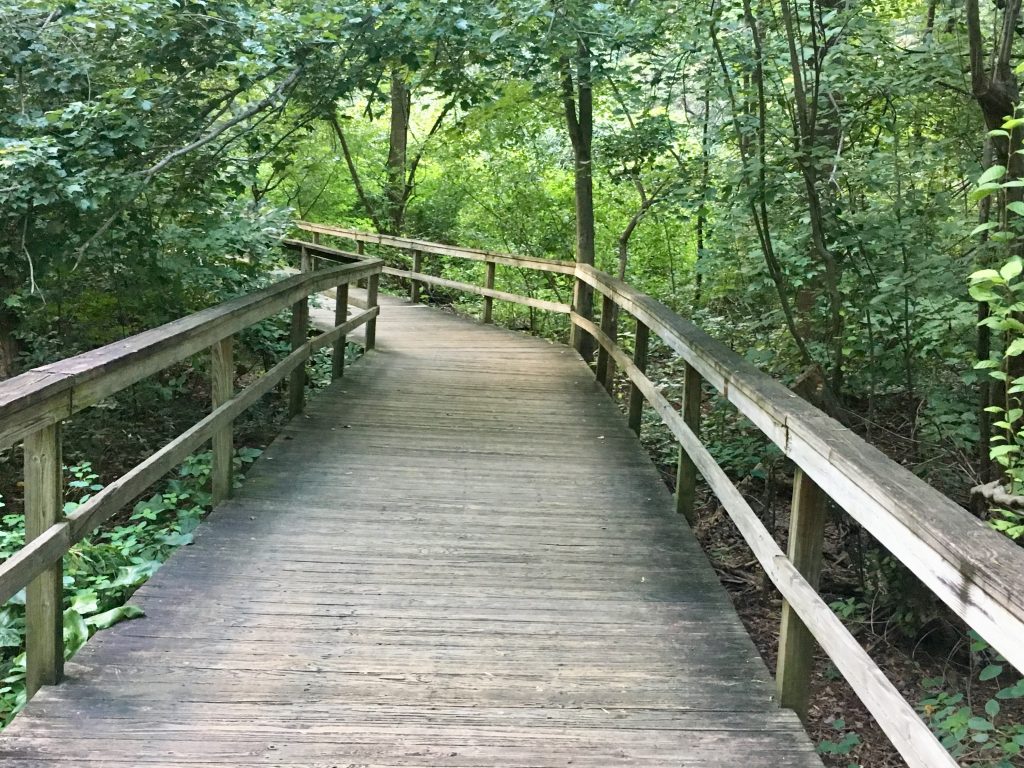 It was about 6:00 pm when my usual adventure companion, Captain Spoonhands, and I parked outside the main entrance, looking as out of place as possible. I feel I should explain that a little. When I think of bogs, swamps, and generally soggy places, I get a strong desire to listen to Floodland by the Sisters of Mercy (a great album, if you're into '80s goth rock). While getting ready to go out to the Bog Garden, that may have been playing, and I may have reverted back to my teenage fashion style. Spoonhands didn't follow suit by dousing himself in black fabrics. Instead, "Lucretia My Reflection" seemed to inspire a more respectable choice of a sports jacket and a pipe. The other patrons of the garden were dressed for light cardio, which I suppose is more reasonable, but I have a flair for the dramatics that always outweighs being reasonable. And now, you at least know you can dress casually or like a brooding goth and still enjoy the garden all the same. Our transportation didn't help us blend in either. The strangest thing about this garden is its location. You forget it while in the bog, but it's in the middle of a neighborhood. The kind of neighborhood that may frown upon a rusted shell of a car that sounds like an old airplane crashing into the English Channel in 1916 as it drives parking on their streets. We parked in front of a nice house anyway. We had to see how many mosquito bites I could get in an hour or so. 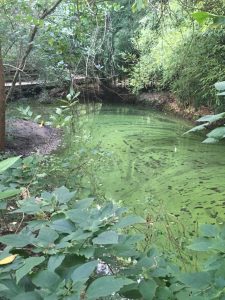 Upon entering the park, we were instantly greeted by a paddling of ducks. They waddled across the section of paved path to what I assume was a place with food, or maybe they were just eating the ground. I don't know how ducks live, and I won't judge them if they do like to eat the ground. I get it; the soil must be rich for the number of plants growing in the garden. The ducks didn't end there. The ducks appeared to live in a patch of bamboo, or at least that's where they were living for the moment. They're not very talkative, but they seemed to be having a good time.

We continued wandering down the boardwalk, stopping every few steps to take in all the sights and sounds. Birds chirping in the trees, leaves rustling in the soft breeze, light splashes in the water from a turtle working its way from one rock to another. With each step you take further into the garden, the more you feel as if you've entered a different world. Somewhere that exists in a different time untouched by urban expansion. It's almost hypnotic in a way. At a certain point you shut out anything that isn't apart of the garden. There were points where on some level I knew I could hear cars passing and occasionally could even see them, but I didn't acknowledge them. Walking the trails was all my mind wanted to take in. Perhaps the waterfall worked. I'll get to that in a moment. 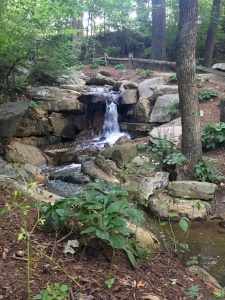 The boardwalk eventually leads you to some difficult decisions. Do you turn left or right? Stay on the boardwalk or go on the trails? That's entirely up to you, but to see Serenity Falls, you'll need to venture off the boardwalk. The waterfall may be man-made, but I wouldn't have known if it was not advertised as such... and if I didn't stumble across the power box in my exploring. It blends in so seamlessly, it's hard to imagine what the area looked like without the waterfall. With a name like Serenity Falls, I have to admit I was left confused. Serenity is without a doubt a foreign concept to me. I prefer to maintain a consistent level of neurosis. So it goes without saying that staring at the falls and listening to the sound of the water left me feeling a little baffled and possibly more anxious than usual for not knowing if I felt serene. I'll go ahead and tell you that yelling "Serenity now!" at the waterfall does not do anything beyond get you a disapproving look from a stranger. But in retrospect, maybe it did work since I may have became one with nature for about two hours. Or as close to that as possible.

Maybe visiting on a muggy summer day isn't for you, but as the weather gets better throughout the month of September, I'd encourage you to take some time and explore this beautiful garden.

Fun fact: I got more mosquito bites writing this on my front porch than I did at the Bog Garden. There's probably some kind of life lesson in that. 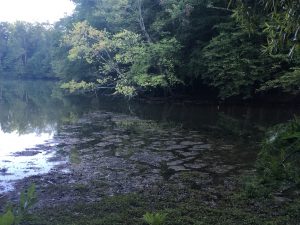