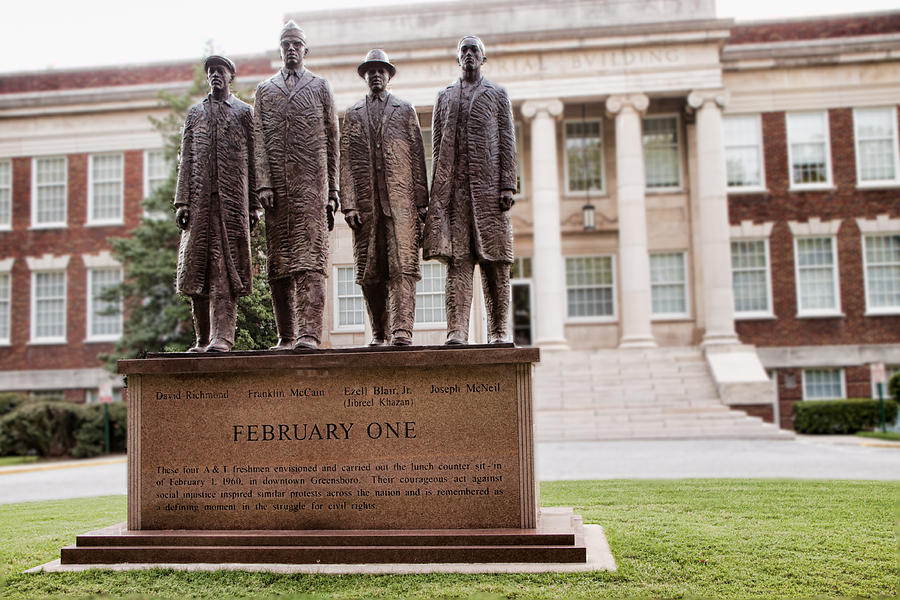 These four brave college students played an instrumental role in increasing national awareness of the Civil Rights Movement in America. As one of the first major sit-ins, the Greensboro Four encouraged others around the nation to challenge segregation laws. Media coverage of these protests increased, allowing more demonstrations to spread.

Citizens around the country participated in nonviolent protests for the desegregation of not only lunch counters, but also for equal service of all public accommodations. Following these, more nonviolent protests arose for the basic equal rights of all African-Americans.

To commemorate the heroic actions and lives of the Greensboro Four, a sculpture was commissioned in 2001 by the North Carolina A&T State University’s chancellor, and was created by artist James Barnhill. The sculpture is based on the historic photograph of Richmond, McCain, Blair, and McNeil leaving the sit-in demonstration at Woolworth department store, marching together.

The statue stands 15-feet tall on the NC A&T campus, and depicts the four students walking side-by-side after their historic protest. The Four are shown marching, rather than sitting for a stronger visual impact and to capture the bold essence of the men.

Inscribed on the statue reads the quote, “These four A&T Freshmen envisioned and carried out the lunch counter sit-in of February 1, 1960 in downtown Greensboro. Their courageous act against social injustice inspired similar progress across the nation and is remembered as a defining moment in the struggle for civil rights.”

This year marks the 58th anniversary of the four students’ momentous acts of courage. Visit the statue this week to commemorate these four individuals and the historic fight for the civil rights of all African-American.